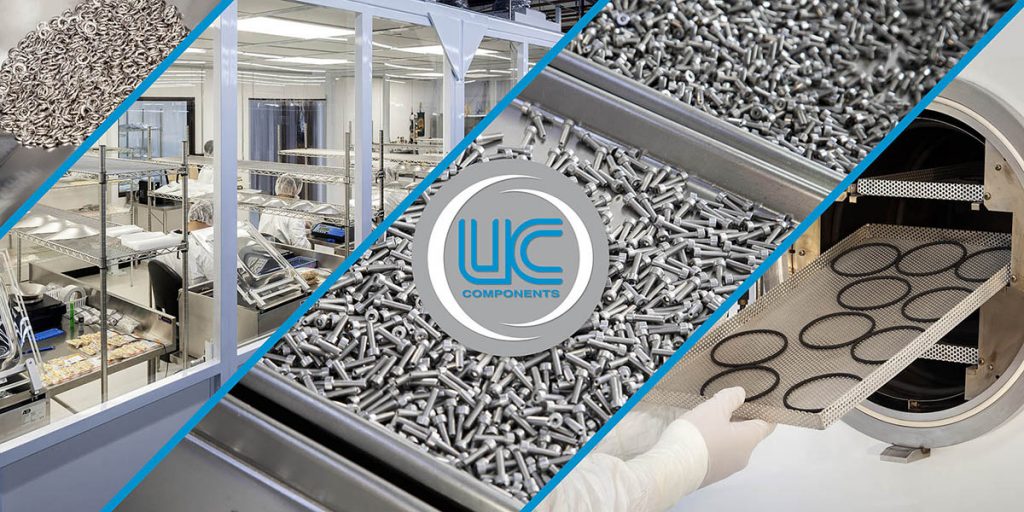 Where did UC Components begin?

Ron Anderson established UC Components in 1972 alongside his regular 9 to 5 job. He had an innovative idea to standardize specialty vented fasteners for the vacuum industry and bought himself a drill press, a spray mist cooler, and a small compressor using his personal credit card. With written permission from his employer at the time, he modified screws and sold them back to his employer. He slowly found other clients as he perfected his vented design and grew the business from there.

Rick, Ron’s son, was in the third grade when he started doing small jobs for his dad, mainly moving screws from one location to another in the family garage. He started working a lot more with his dad’s new company between the age of 13 and 14. As he continued to get older he started learning how to vent the screws properly and got really proficient at it.

As the company grew, Ron rented a light industrial office across the Bay in Mountain View. It was his first departure from Union City. Initially, UC Components was only manufacturing vented fasteners specifically for vacuum applications primarily for defense, early warning radar, and vacuum tubes. Later they branched into spaceflight applications and semiconductor manufacturing.

Business challenges in the 1970s

The main challenge that pushed Ron into his business full-time was the 1970s recession. There was considerable unemployment, high inflation, and insufficient money all around. He ended up being laid off twice during that period. When he was first laid off, he started the vented screw project. The next time he was laid off, he put together the plans to fully build his vented screw business. Of course, the biggest challenges he faced was having enough operating income and finding suppliers that would sell to him. Imported product quality was another huge issue for the business, but that ended up being an asset for the company as Ron’s sourced materials and final products were of higher quality than the imported items.

Ralph Duniway of Duniway Stockroom, one of the good friends of Ron, initially spearheaded the promotion of Ron’s new business. Ralph did trade shows, made sales calls, and assisted with other marketing and outreach efforts that Ron didn’t have the time or resources to do. Ralph promoted the UC Component’s catalogs at all of the relevant industry trade shows. Word of mouth and a few friends within the industry pushed the company from a couple of OEMs, into the semiconductor industry, and then into the hands of some prominent end-users; like Intel and AMD.

Rick met Jeff while attending University in his 20s and they became fast friends. Jeff was great with numbers and since Jeff was interested in the family business, Rick’s father started mentoring him on that side of the business. Both Jeff and Rick stepped into their current roles at the company after Ron’s passing.

Key factors for the overall success of the company

UC Components, Inc. would not be where it is today without the help and support of so many people. Initially, it was just Ron, his friends, and his peers. Ron had the ideas and his friends and peers guided him through the beginning of starting and growing the company. From there it grew to more employees, families, friends, and colleagues of UC Components, Inc. to the business partners, connections, referrals, and more – they are all truly the reason for the business’s overall success.

Internally, the human connection with the employees truly has led to the company’s overall growth. The company ensures transparency, both internally and externally, so that everyone knows who they are, where they’re going, or where their attentions should be. UC Components, Inc. treats all of their employees well, offering competitive salaries and a good benefits package. Turnover at the company is very low.

Externally, the people outside the company that carried the word for them into the marketplace, all of their ‘Ralph Duniways’ out there, that did a lot to make UC components what it is. They really helped UC gain a foothold throughout the American vacuum society and other places where engineers come together. These early partners and customers were another key to the success of the business.

Word of mouth from family, friends, peers and satisfied customers helped the company get started and gain a foothold overseas. Ralph Duniway introduced Ron to the two biggest European distributors for vacuum hardware, which made a huge difference in their growth into the European marketplace. After gaining a secure foothold in both Switzerland and Germany, UC Components started gaining business from other countries, like the UK.

UC Components, Inc. is also an active member of many vacuum-industry related societies and groups. Groups such as Vacuum Equipment, AVM, AVS, MRS, SPIE, and many more. They are always happy to partner with like-minded industry professionals and organizations.

UC Components, Inc. has always understood the demands of the industry and the importance of environment-friendly products and processes. To this day, they continue to make improvements around their facility to reduce their carbon footprint and become more energy efficient. They recycle all of their stainless steel as well as other materials, as applicable. They also prefer to use recycled materials for all of their product packaging.

Since cleaning is a big part of their business, from the very start they opted to go with an aqueous-based cleaning process instead of utilizing toxic chemicals. Before building their clean rooms they used laminar flow hoods under laminar flow buds, which eventually evolved into their first clean room.

The clean rooms also came before their RediVac® system was invented. RediVac® started as an advertising slogan (RediVac® = Ready for Vacuum) that later became the term to describe their entire cleaning process. The RediVac® system (a term that UC has officially registered as a trademark) ensures that literally every single fastener and seal ordered from UC arrives ready to install immediately – saving UC’s customers time, effort, and money. This proprietary process reduces surface particulates and other contamination by utilizing a multi-stage cleaning, inspecting, and packaging process which is all done inside of UC’s top-of-the-line certified Class 100/ISO Class 5 Clean room. The entire UC RediVac® product line of screws, washers, and nuts is engineered for faster pump-down and more complete evacuation of vacuum systems, as well as corrosion resistance and galling prevention.

With the addition of clean rooms also came vacuum baked O-rings (vacuum baking them drives out water vapor, one of the biggest contaminants in vacuum systems). Baking the O-ring before you install it not only reduces contamination but also speeds your pump down process. It has become an integral part of their company and offerings over the last few years.

What makes UC Components, Inc. one of the most trusted companies in the industry worldwide?

UC Components. Inc. is proud to participate in a wide variety of quality and compliance standards. They strive to be a socially and environmentally responsible business partner. They maintain ISO 9001 and other quality certifications, they follow the copy/exact management guidelines, they process everything in certified clean rooms, and much more. All of these efforts significantly expanded the company’s footprint and established them as the world leader in vacuum hardware.

Initially the only product UC offered was stainless steel vented screws in inch sizes. Since their humble beginnings they have added a variety of fastener materials (metals, plastics, ceramics, exotics, and more), a wide variety of head styles, as well as vented washers, vented hex nuts, non-vented hardware, O-rings, and expanded to both inch and metric sizes.

Their O-rings also come in a wide variety of materials and sizes, from tiny metric O-rings a few millimeters in diameter – all the way up to chamber door seals measuring several feet. The larger sizes are made explicitly for things like colossal chamber door arrays. Their standard O-rings are manufactured from top quality fluoroelastomer materials. However, Buna, silicone, and other materials are available upon request.

As the markets for the use of HV and UHV equipment have grown, UC has grown right along with them, from a “Mom and Pop” shop into a second-generation, family-owned business with approximately 50 employees on staff. UC Components, Inc. serves OEMs, end users, government labs and facilities, universities, and a wide variety of other types of customers all around the world from our location on the cutting-edge of California’s Silicon Valley.

UC Components, Inc. is still one of the leading manufacturers of fastener and seal products for clean-critical environments in the 21st century, with a focus on plated, coated, polished, cleaned, and vented screws for High and Ultra High Vacuum equipment.

Want to know more about UC Components, Inc. from our chat with Rick? Check out the full video from our talk!

PrevPreviousYour O-ring is a problem, why?
NextDoes your fastener supplier Copy Exactly!?Next 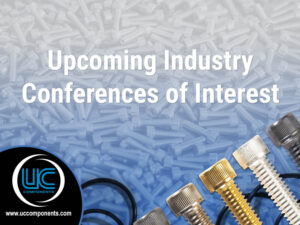 Please find below upcoming industry conferences or tradeshows that may be of interest to you. 2023 CCM & IMEKO TC16 7th International Conference on Pressure 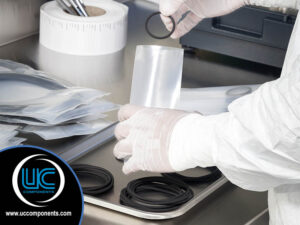 Permeation, or the permeability coefficient, of a polymer refers to the volumetric flow of gasses, under controlled conditions, through the material’s surface. Permeability does not

Epilepsy Safe Mode
Dampens color and removes blinks
This mode enables people with epilepsy to use the website safely by eliminating the risk of seizures that result from flashing or blinking animations and risky color combinations.
Visually Impaired Mode
Improves website's visuals
This mode adjusts the website for the convenience of users with visual impairments such as Degrading Eyesight, Tunnel Vision, Cataract, Glaucoma, and others.
Cognitive Disability Mode
Helps to focus on specific content
This mode provides different assistive options to help users with cognitive impairments such as Dyslexia, Autism, CVA, and others, to focus on the essential elements of the website more easily.
ADHD Friendly Mode
Reduces distractions and improve focus
This mode helps users with ADHD and Neurodevelopmental disorders to read, browse, and focus on the main website elements more easily while significantly reducing distractions.
Blindness Mode
Allows using the site with your screen-reader
This mode configures the website to be compatible with screen-readers such as JAWS, NVDA, VoiceOver, and TalkBack. A screen-reader is software for blind users that is installed on a computer and smartphone, and websites must be compatible with it.